Mighty, Lavish, Majestic, grandure and adjective would be short and less to describe this magnificent fortified Nahargad palace. The palace built by Maharaja Sawai Jai Singh II in 1734. A man who has built some of the finest architectures in the pink city, Jaipur.

Our guides, had stated a sad affair of saying nothing much to see but added that it would be great to see the overall city and that too at evening. Well the last statement did make a good relevance to us and we happened to reach Nahargad by around 4.30 pm exhausted after the fun & exploratory walk at Jaigarh. One thing for sure, that do pick your food pack and bottles of water unless you really want to explore.

Well, hey we were there for some fun and exploring and the fort did not disappoint. Off course like any of the forts in Rajasthan, the entry is through the huge doors and it then opens up to the huge courtyard… wow!! awestruck would be an understatement.

The colours of the walls are nostalgic and does take you to the realm of past and the lavishness tagged to it… As you move from the courtyard to the various rooms, we are into the beautiful alleys of rooms and arches.

The walls are so so smooth that one could see their reflection in it. Must say, the archeological department is doing a great job in maintaining it. Inspite of so many people walking around, you can happily sit down and get some amazing photographs. Now I understand why these places could be a photographers paradise.

One lead to the other and started climbing the stairs. The most amazing aspect was the roof of the palace. A must place especially in the evenings. The breathtaking view of the whole Jaipur city below to that of the setting sun against the backdrop of the architectural domes. 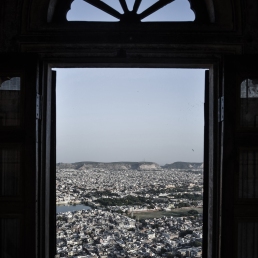 Do make sure that you spend time on the roof and see the sun setting against the magnificent domes. A good place for some quite time as the breeze hits you along with the last brightness…

Well I wished that the time never stopped. It had to when we heard the hart whistle of our khakhi dressed policeman man pushing every one to move down as it was almost 6 pm.

As we stepped down and came back to the courtyard, I waited for all folks to leave and then requested the security for a few more minutes, they obliged and rather helped me. It is really nice of them.

There is a beautiful restaurant for those who want to spend the evening after the sun goes down. And we chose to move on and spend the day..

It was indeed a great decision to not miss this lovely piece of history, I wished I had more time to spend and explore this beautiful palace… 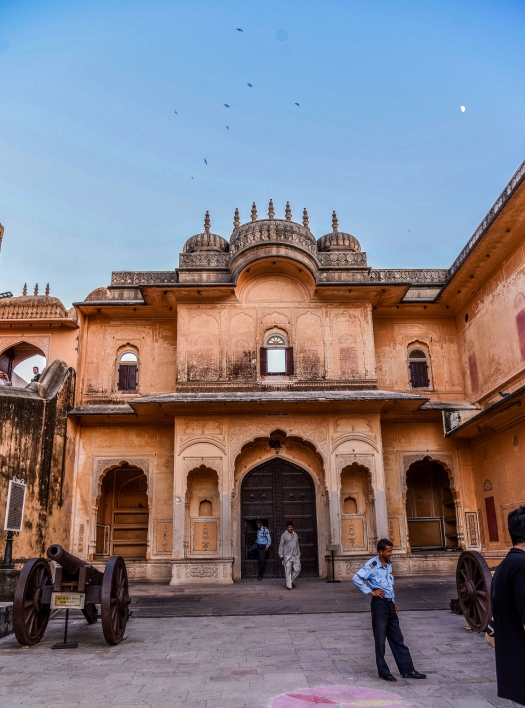 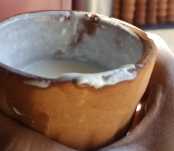 Well not every Indian would add and agree to that statement with Rose and the “Quintessential Lassi”… When the world talks about the white sweet lassi, one place in Bhubaneswar, says Nah!! we do not like it white, let’s make it brown. Why should every thing from curd be white.

Well, welcome to “Lingaraj Lassi centre” . A bustling city space right in the heart of the city at Shahid Nagar (Near Durga Mandapa). Bhubaneswar being a foodies delight, this place adds to the flavour and it is very difficult to resist not going there and gulping down a glass of chill Lingaraj Lassi.

Having heard about this lassi, we happened to head out to have this beautiful sweetened

lassi. At first, the place being crowded makes you think about the popularity and fan following. There was ample space to park our car though slightly away, but the pull was strong for a nice walk. I struggled to first understand what to be done because of the crowd. Then we slowly made our way to see the whole jamboree of activities that happen right in front of you.

On the left as one enters, there was one who was scraping heaps of coconut, while right in front was a small cemented space to hold big blocks of ice which was being broken and taken for mixing it up with the lassi. As this was happening, what caught my fascination was the four huge furnaces on which there were huge pots of Khoa (Milk Product) was being made. The lassi here is made different with loads and loads of Khoa (Another milk product), which is basically what gives it the brown colour and the sweetness that it brings.  It is fascinating to see that there was this one man who kept staring the pots to get the right thickness and flavour to Khoa. Once this was done, curd along with sugar and Khoa was put in a mixer and served. There were close to fifteen mixers kept just for this purpose,

There are close to three people manning the serving area but one held the money and was mouthing the instructions while he himself went on serving. The coordination was so smooth that, only when the money was paid the glasses were held out to the customer.   This gentleman held a thick wad of money in his hand, explicitly saying he is the cashier without even having a board.

The prices were economical, a large glass (Approx 500 Ml) is priced at Rs50/- while the small glass (Approx 300 ml) was priced Rs 40/-. Now one can have a sugar free lassi too, but then when you have so much sweetness in Khoa, what is sugar free??

What ever said and done, once the liquid flows down the throat, there is a sense of peace

and pure bliss. Well the only caution that it is really a sweet concoction and could hit you really heard, so choose your glass accordingly.

And.. if you are in Bhubaneswar, you could place an online order too..

Having said so, will always say.. “If in Bhubaneswar during summers (Available only in summers), never ever miss this heady Lassi”

Oh!! you can check their humble space on facebook too but not that active, it just says that the focus of these guys on the product and not on publicity. It is truly for its loyal customers like me to do.. 🙂