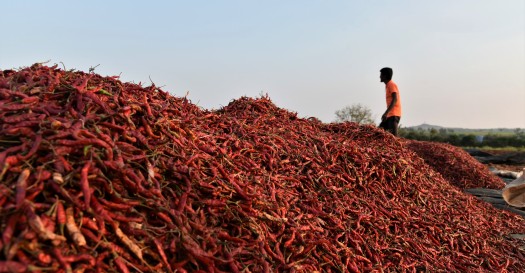 Chilli, Red and spicy… one of the major ingredients for any preparation in India. The mere thought of Red Chilli sends one in an imagination of a Red or deep Orange coloured shriveled crescent moon structure filled with capsaicin seeds.

Chilli as such is not a native of India but rather an origin from New Mexico, Guetamala, Peru and has been domesticated in an around 5000 BC. Columbus was the one who

brought these beautiful fiery fruits to Europe and from there this has moved to Asia. It came to India in around 1584. It was initially used as a crop to protect the crops from the birds but today is a main crop as such. I was largely aware that Chilli production happens at Andhra Pradesh & Rajasthan but never knew that Maharashtra, Odisha & Karnataka are also major contributors. While Assam’s city Tezpur produces one of the spiciest chilies the world has, Naga Jalokia, the rest of the country produces chilli that are used in food and cosmetics (which was a surprise to know for me!!).

Well the other big surprise were the chilies being produced in Karnataka. I never knew about its Chilli producing capability and the variety that it produces. One of the largest producing areas is Byadgi region, near Haveri. The chilies from Byadgi are known for their red colour enhancement in food and less on the spice content. They are also exported for usage in cosmetics especially Lipsticks.

We happened to be travelling from our visit from Galaganath to Haveri and thanks to our GPS, it took us through some of the most lovely interior villages of north Karnataka. As we were crossing the village of Agadi, I pulled over to the sides of a paddy field on the sight of red chilies being dumped in the fields.

I had never seen harvesting of Red chilies and the sight was really exciting. We got down and literally ran into the fields with excitement. In a large clearing of the field there were close to 9 people working in sorting and packing the chilies in sacks. There was an air of excitement in them when my partner started talking to them. 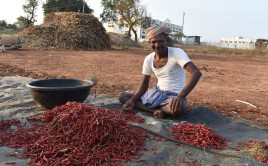 She had no clue of Kannada and they had no clue of any other language. Actually, my partner amazes me all the time in the way she communicates with strangers and has good laughter with them.

Our broken discussions lead us to discover that this variety of Chilies that were produces was to be shifted to Byadgi which is the central zone for all Chilies production in the region. Here they were drying, sorting the chilies based on the colour and then packing them in sacks.

It was interesting to see the bugs in the chilies. They reminded me of the bugs from “Mummy” movie.

We took photos and videos of them doing the various activities on the land. The laughter that they had was coy and their simplicity was just contagious. It was a time that tells one that the heart of India is in its villages truly.

As we left from the farm land, we did manage to pick up some chilies for ourselves too, off course we paid them for the generosity. It was a beautiful evening to spend time in the rural part of this beautiful country.