Banavasi, the names connects to being the oldest and the first capital of Karnataka is today a quite sleepy town with its beautiful Pineapple farms and the majestic Madhukeshwara temple.

Looking at the temple one can certainly say that this place would have been a high activity place. The Kadamba dynasty was the first dynasty to rule over the North Karnataka in the 3rd century AD. It is no doubt the oldest places noted in the annals of history of  Karnataka. Banavasi, has its reference in the records of Ptolemy (Dates to 1st century), Kalidasa also had visited this lovely place and there are references of Banavasi in his Meghaduta and also had been visited by monks during Ashoka times.

Dasaavatara depicted around the temple

The Madhukeshwara temple holds its relevance from mythology where Lord Vishnu had killed a demon called Madhu on the behest of Lord Shiva. Initially this temple was built in reverence to Lord Vishnu, interestingly today we see a great Shivalinga, who is called as Madhukeshvaralinga.

The temple and place was later under the control of the Chalukya and then the Hoyasala dynasties. Both the dynasty have an impact on the temple and its architecture.

As one enters the temple, one is welcome by the openness of the place. The Gopuram of the temple is flat and short, typical of the temple structures in the Western Ghats.

The inner pillars seems to be a combination of structures from different dynasties. The pillars does showcase the fact that India even in 1st Century was so well advanced that it could carve out pillars that stand tall even after 2000 plus years. A marvel and feat to feel proud about this culture. The carvings on the pillars came in much later with the Hoyasala.

As we enter the inner temple, one sees a huge Nandi (Bull, Lord Shiva’s vehicle) should be at least 6 ft in height. 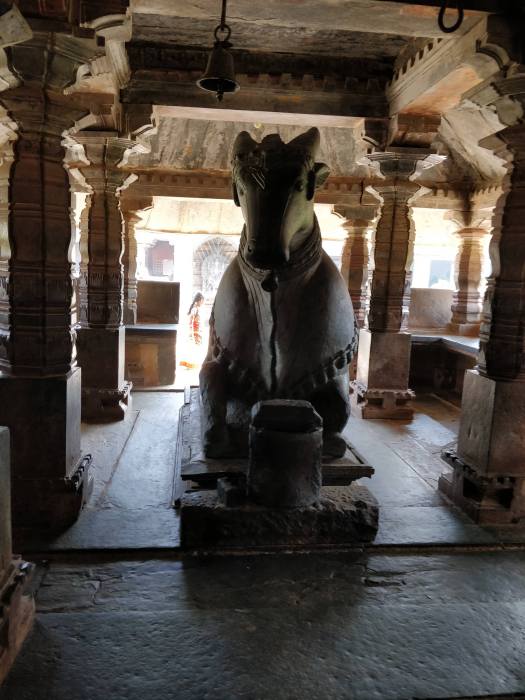 The uniqueness of this Nandi is that, the head of the Nandi is at an angle where, one eye is focused on Lord Shiva while the other is intently looking at Goddess Parvathi, whose temple is smaller and adjacent to Lord Shiva’s main temple.

The sanctum has the Shiva Linga which is huge and has a flat top which depicts of the time a little later than the Kadamba time.

The outer walls temple has got the idols of both Shiva and Vishnu. A majority of sculptures are that of Lord Vishu and does talk about the temple being dedicated to Lord Vishnu. This may be one of the few temples in India that have an elaborate carving of Lord Indra with his consort on his Airavata, the elephant. The sculpture work is simple yet mesmerising.

In the temple space one would find carvings of the five headed snake with Prakrit inscription from 2nd century.

In the courtyard of the temple one would also see a stone cot, with monolithic structures that talk about the craftsmanship of the Shonda rulers.

After spending close to an hour or more in the temple, we stepped out to relish ourselves with some of the sweetest Pineapples that one could ever have. Banavasi, today contributes significantly to the Pineapple production of Karnataka. There are farmlands that produce these sweet pineapples. One could also see factories to package and may be export them.

Before we left this beautiful little space well tucked in the western Ghats, we had our simple lunch at a Khanawali. We enjoyed a simple home made vegetarian lunch managed by women. The simplicity of the food and people have got entrenched in our hearts, minds and stomach too. 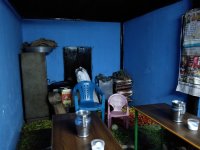 It is said that perhaps, in those times apart from Varanasi, Banavasi was the only other city that had a culmination of many religious beliefs. One can only imagine the magnitude of this place which had laid its relevance more than some 2000 years ago.

As we left the place, the sweetness of the pineapple and the past architecture lingered through the return journey of ours.

Check out my New releases @ Amazon and enjoy the short stories.